Proves to be a Show Stopper at this Year's NASCC 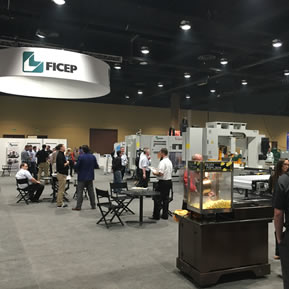 Fabricators from throughout North American as well as from overseas were quickly blown away by the level of technology that Ficep was exhibiting at this year's NASCC in Orlando, Florida. Visitors were demonstrated how Ficep's powerful software could simulate a fabricator's contracts through different alternative layouts to evaluate the man hours required per ton to fabricate each contract with a specific layout. Demonstrations also showed how the fabrication process could be viewed in real time with Intelligent Steel Fabrication

Intelligent Steel Fabrication encompasses more than just the ability to simulate jobs and then viewing the process in real time. The comprehensive software solution manages the entire fabrication shop. Starting with purchasing/stock control, nesting, routing, CNC program generation and last, but not least, seamless processing through the system without direct operator involvement. 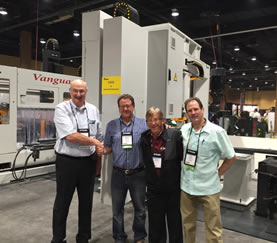 Tom Boyer, President of Ficep Corporation congratulates Steve Fisher Jr., Steve Fisher Sr. and Kurt Fisher all of Steel Fab Enterprises of Lancaster, Pennsylvania on their purchase of the Ficep 1103 DDVB drill/saw system that was exhibited at the NASCC.