The major trend in the machine tool industry has been for the past 30 plus years to increase the capability of the machine tool to provide a "production cell" which features multiple capabilities. This expansive capability enables multiple processes to be achieved within a single work cell without the need to engage additional material handling, labor, process time and plant space.

This concept has been endorsed by Ficep's engineers in the development of the Endeavour line of CNC drill lines for the efficient processing of structural steel. A few of the industry leading processes that can be realized by the Endeavour production cell with an independent sub axis on each spindle can be summarized as follows:

Ficep has once again shown itself to be the technology leader in the market today by introducing efficient milling capability on their Endeavour drilling lines. The Endeavour drill product line features an independent sub axis for each of the three spindles in the system. This capability enables the productivity to increase by up to 300% when compared to the old technology of three spindle drill lines where the spindles are fixed.

Weld Prep in the Web with Flange Weld Prep 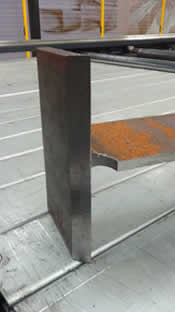 That's correct! The exclusive independent sub axis of the Ficep Endeavor CNC drill permits the production of both flange bevels and rat holes simultaneously. The section is securely clamped and only the tool is moving to produce this milling operation at maximum efficiency and tool life.

Other productive milling operations are also possible on the Ficep Endeavor CNC drill lines such as:

Scribing on all Four Surfaces Simultaneously

When scribing layout information that was downloaded from an XML file that is required on all four surfaces, this can be marked with layout locations and fitting information simultaneously at speeds up to 30 feet per minute and not in just one face at a time.

Once again, Ficep's engineers have proven their innovative nature to expand the capability of their CNC drill lines for users that can enjoy enhanced versatility while lowering their cost per ton!