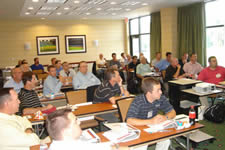 The focus of the meeting was to introduce the latest organizational and product developments to the Ficep Corporation distributors. 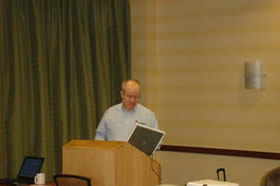 Marco Carmadella, Director of Customer Service, presents to the distributor network the recent growth and structural changes in the customer service department. Marco explained that currently 98% of customer calls are being resolved by our expanded internal technical support staff and their ability to diagnose problems by connecting to Ficep CNC lines by the internet. 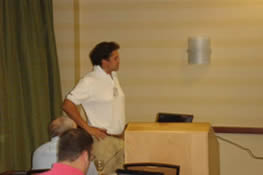 Christian Colombo of Ficep SpA explains to the group how the ability to download XML files from CAD systems has totally automated not just the automatic production of sawing, drill and coping but now all the required layout information is being downloaded seamlessly from CAD packages. The level of information for scribing includes the layout location, part number of the detail that is to be welded at that location and the orientation scribe mark.

Thursday night the group was entertained on the Lantern Queen based in Havre de Grace, Maryland for refreshments, dinner and some scenic views as we leave the Susquehanna River for the Chesapeake Bay. 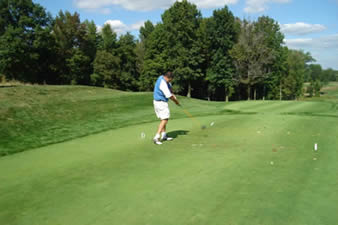 The sales meeting agenda included classroom presentations and hands-on equipment demonstrations that were made at the Ficep Corporation facility by members of the Ficep tech support staff.

The group was broken into small groups where individual presentations were made on multiple CNC lines. When the work was over, it was time for a little fun and competition at Bulle Rock -- a breathtaking course that has hosted the LPGA tournament for the past four years.

Justin Oslosky of Fox Machinery admires his tee shot while Mike Pinchot of Fabricating Machine Tools get ready to hit. Mike Kistler of Fox Machinery hits this one 280 yards to win the longest drive competition. 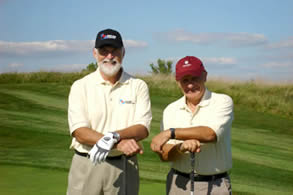 Team mates Al Roebuck of American Machinery & Blade and Peter Janes of Ficep were part of the West Coast contingent, but they came up short to the sub par round posted by the winning foursome of:

The positive acceptance by the distributor group of this format, in conjunction with the golf outing, has assured that the above winning foursome will have to defend their title next year!