Fabricators from around the globe were TOTALLY AMAZED at the productive drill feed rates of 50 inches per minute that Ficep was demonstrating at the recent show in Chicago. There was lots to see at FabTech 2009, but this was no trick as this single tool had drilled hundreds of holes dry without replacement by the end of the show.

The Type C 16 plate processing system that was exhibited at the show combines the operations of:

for processing finished parts out of stock plates up to 5 ft. in width and 3/4" in thickness.
Ficep, which was founded in 1930, has manufactured drilling systems for structural steel and plate fabrication lines since the 50's. In the 80's, Ficep engineering started to advance their drilling technology from hydraulics to ball screw spindle feeds to take full advantage of the superior drilling performance and tool life that was achieved with this design.

Today Ficep's plate lines run with spindle speeds of up to 5,000 RPM which is essential in conjunction with ball screw feeds to achieve the type of productive drilling rates (50 inches per minute) that were exhibited at FabTech 2009.

The Ficep drilling technology incorporates a robust spindle design with a high performance gearbox and short spindle which is advanced as one unit to achieve unbelievable drilling performance without vibration to diminish performance and tool life. The noise created by the air cooling the tool was louder than the actual drilling even at 50 inches per minute. 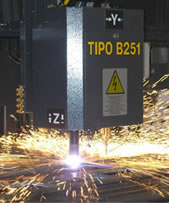 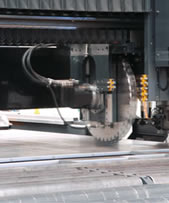 The Type C 16 is capable of scribing part marks, but in those cases where part identification is required after multiple coats of paint or galvanizing, the programmable marking system is the solution. This CNC marking head has all alpha/numeric characters that are randomly programmable so the parts can be marked without any set up so their identification remains with the finished part after it is processed and cut from the stock size plate.

Once again, attendees were full of questions as evidenced by the size of the crowds around the Type C 16 about all the new revolutionary technology that Ficep continues to introduce to the industry.