Florida Scribes Their Way to Increased Productivity and Profit!

In 1982 Larry Norman founded GMF as he reached out with a partner and a single welding machine to find work fabricating steel.

Interested in securing work, he visited an amusement park about 100 miles away to see if he could bid on some steel fabrication. The buyer at that time questioned Larry if he really had a business as Larry did not even have a business card. Larry was quick to solve that problem and returned with a freshly minted business card so he could bid on some pending work and ended up leaving that day with a contract worth $1,000,000. Obviously, this was the sign that Larry's new venture was the right idea and the timing was perfect. As Larry's background was in the area of machining, he quickly broadened the focus of the business to also include contract machining.

In the subsequent years, Larry continued to perform work for the amusement parks but expanded his focus to include structural steel for warehouses, retail stores and office buildings.

Larry was fortunate to have two sons, Adam and Andy, who later joined the business. This addressed the challenge that many fabricators face in later years, which is to maintain the viability of the company that they worked so hard to create.

As the sons became more involved in the business, they started to explore labor saving alternatives in the structural steel fabrication area. CNC technology was not new to GMF, as they had installed several CNC machines previously to address their job shop machining business.

Prior to 2012 GMF fabricated structural steel with manual layout, radial arm drills and a lot of material handling, which is extremely labor intensive. At that time Adam Norman, who runs the manufacturing operation, decided to explore CNC drilling of structural steel. He felt that they should proceed with the purchase of a single spindle traveling column type CNC drill line as this required the smallest footprint and would represent a substantial step forward in this area. 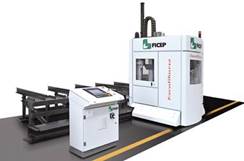 After researching the product offering from the different manufacturers, they decided to proceed with FICEP primarily for the following reasons:

The following comparison shows the results of the installation of the FICEP Excalibur 12 CNC drill line.

Bottom line, the installation of the FICEP Excalibur 12 reduced the labor required by 60% and the tonnage increased by almost 375%!

Having witnessed firsthand how much fit up time could be saved by the scribing of the layout locations, Adam wanted to achieve more labor savings. Once again, Adam researched the different manufacturers for a 3-spindle drill with saw in tandem to save on the handling cost associated with sawing.

mark on all four sides of the structural steel section in one pass.

The other major reason for going with FICEP was the comprehensive capabilities of the Steel Projects software,

which is part of the FICEP Group. Adam states, "The ability of Steel Projects to extract automatically the scribing data from the 3-D model without manual programming is the key as it would make no sense to manually program locations, length of lines, radius criteria, etc." Adam proceeds to explain, "The software is so intelligent it automatically reduces scribing lines to just what is required for my fitters and eliminates any potential collisions

between the tool and the flange if the proposed scribing is too close to the flange. Presently, we import automatically all the holes and complete scribing information via XML files from Tekla and DSTV files from SDS2."

"We even perform automatically the layout for any required copes in addition to the required layout information for the plate detail".

"These guys at Steel Projects are fantastic as they are in constant contact with us about new pending updates and features. Just recently, they expanded the capability of their software so I can now witness in real time the production data for a specific time period and by part number so I know without going to the shop what our line's productivity is and if a specific part has been processed".

Adam claims, "The purchase of the two FICEP drills has represented a huge improvement for our company. The addition of the three-spindle FICEP with the saw in tandem has enabled me to increase my tonnage by an additional 33% over the single spindle FICEP and at the same time reduce my weekly payroll by $3,000".

GMF is still active in the amusement park work as well as commercial structural steel. Most recently, they have expanded their product focus to include sub sea work.

Even though they are located in central Florida, they go as far west as Texas and north into North Carolina.

Adam stated, "Presently, we have a new FICEP angle line coming our way as we are constantly looking for ways to improve our productivity so we can continue to present a cost-effective solution for our customers."