In the late 80's the Baltimore Orioles were a struggling franchise that seemed to have had its heydays in the earlier part of the 80's winning the World Series in 1983 with the likes of future Hall of Fame players like Eddie Murray and Cal Ripken on the roster. Most of us have heard and/or witnessed the evolution of a professional sport team where they travel from the penthouse to the hen house in just a season or two.

Accepting that Memorial Stadium was sub standard and understanding that the Orioles needed a shot in the arm and the fear that they would also pull a 'Midnight Maneuver', the city assembled a committee to study what could be done to update the old Memorial Stadium to achieve a stronger appeal to the fans and ultimately bring more fans into the ballpark.

After three months it was determined that a plan to try to modify Memorial Stadium was hopeless and what was required was an entirely new facility. As the study continued, it became apparent that a single purpose sports facility was what was needed, but beyond that initial conclusion the committee decided it was necessary to go outside the box and re-think the entire need and goals.

Most towns during this period had found their 'Field of Dreams', not in a remote corn field in Iowa, but typically in the remote suburbs of the city that they served. The novel approach that Baltimore decided to pursue was to incorporate the new facility deep within the old part of the city as part of an urban renewal concept while trying to maintain the look and feel of that part of the city. 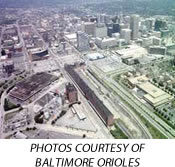 The photo above shows the construction site as it looked in 1989 with the many existing structures that needed to be removed. In the middle of this site there was a steel frame industrial building with overhead cranes that was on the location that would ultimately become third base at Camden Yards which was the baseball home of Cal Ripken. This is where he played to set the record of 2,632 consecutive games which is one record that most baseball men doubt can ever be toppled.

One of the major advantages of a steel frame structure over alternative construction is that it can be removed without destruction and ultimately erected at a new site. In this case, this steel structure was removed from the area that would ultimately be Cal Ripken's 3rd base home to an industrial park in Forest Hill, Maryland which is a few miles from his hometown and the sites of the Cal Ripken Museum and of Cal Ripken Baseball.

The new building's owner would be using the facility to fabricate buckets for front end loaders. As his business grew, the versatility of structural steel, once again, became apparent with this structure as an additional bay was efficiently added to double the square footage of the original structure.