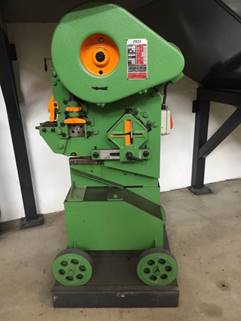 Prior to 1966 most structural steel was fabricated by employing manual layout in conjunction with ironworkers, magnetic based drills, portable hydraulic punches or radial arm drills.

There were some more productive solutions such as large mechanical punches utilized in conjunction with a mechanical gauging system that was referred to in the industry as a spacing table. The spacing table design consisted of a motorized positioning carriage with a lineal scale that the operator used as a reference to achieve the desired lineal dimension. Motorization of the positioning carriage was employed to get close to the desired dimension, and a large wheel was manually rotated by the operator who road on the carriage to achieve the final desired position.

The structural section was conveyed on a large disc or wheels that road on the underside of the web or flange that required lateral adjustment when changing section sizes. Only one surface could be processed at a time, and the section had to be manually positioned for each surface to be punched. When holes were required in all three surfaces, the position carriage had to make six passes to process just one section.

The mechanical punch consisted of multiple punches, but they had to be manually set to the required gage line. Bottom line, this concept was only suited when large volumes of the same section and hole pattern could be processed at the same time. Even on tier buildings, where duplication was often typical, the fabricator had to process all the same sections at the same time, which on a multiple-story building added to the inventory, storage space and material handling challenges.

In the early 60's FICEP's engineering team stepped outside the box to innovate a completely different approach to the required challenge. These were the identified challenges that were part of the design criteria. 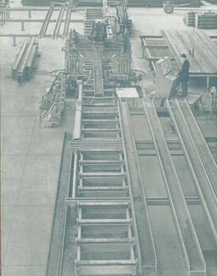 In 1966 the market was introduced to the first numerically controlled drilling line that addressed the design criteria that FICEP's engineering team was tasked to address.

This design was not just the first automated drilling line available to the industry; the design represented a quantum leap for fabricators around the world.

FICEP's industry leading line up of drill line solutions has continuously evolved over several thousand lines currently shipped to the world market as 1966 was just the beginning. FICEP has traditionally always been the first with innovative solutions but never complacent with a solution as they are always pushing the development window to higher limits!